1. The Greeks in the South of Ukraine:

Following the general framework strategy of promoting and disseminating the Greek culture, the Branch of the Hellenic Foundatio

n for Culture, with the support from the Embassy of Greece in Ukraine and Greek communities of Ukraine, has established a close collaboration with research and educational institutions both within and outside Ukraine (Odessa I.I. Mechnikov National University,  Tauric V.I. Vernadskiy National University, A.E. Krymskiy Institute for Oriental Studies of the Nation

al Academy of Sciences of Ukraine, University of Sofia, Tauric Center for Hellenic Studies). For the first time there was made an attempt of the comprehensive and multifaceted research in recording and systematizing the data concerning history and development of the Greek population of the southern Ukraine, in particular, in those areas where the Greek communities have preserved their cultural features or, at least, some traits of the Greek peculiarity.

The program is aimed at collecting and promoting the historical and cultural information on spatial distribution of the Greek communities and intergenerational continuity in them under the impact of the neighboring ethnic groups.

2. Contribution of Greeks to the Development of Odessa in the 19th century:

The program “Contribution of Greeks to the Development of Odessa in the 19th century” is developed by the Center for Modern Greek Studies of the Greek National Research Foundation and being implemented in collaboration with and under the financial support of the HFC.

Odessa, formerly a “free port” with multinational population, displays prominent European appearance designed by French town-planners, constructed by Italian architects and preserving capitals of entrepreneurs of various nations. Of the latter, Greek emigrants and merchants settled in Odessa played an important part in the development of the town.

Preliminary studies at the State Archive in Odessa Region revealed over 50 historic buildings in the central part of the modern city, which in the past had been owned by Greeks. These findings suggest that in the first half of the 19th century the Greeks invested some of their incomes from the grain trade into construction of Odessa. Many requests for reconstruction permits supplemented with the plans of the prospective mansions were filed by Greek proprietors of buildings in the central part of the town between 1840 and 1880. Documents from the archive present much evidence in both the architecture of buildings and investment projects as well as socio-economic activities.

These two projects were implemented in collaboration with the State Archive in Odessa Region and Mr. N.A. Kalmakan. They represent publication of entries from the record books of the Greek Church of Holy Trinity in Odessa and the Greek Church of John the Baptist in the village of Sverdlovo dated to 1799-1920. The electronic database being developed on the basis of the collected records shall become an important instrument for a genealogical research.

The HFC has been supporting archaeological research in Odessa Region and developing partnerships and programs facilitating communication between Greek and Ukrainian archaeologists in order to promote the heritage of ancient Greek colonies in the region. These include, but not limited to, organizing archaeological expeditions participated by faculties and students from Greece and Ukraine, offering scholarships to researchers in the fields of numismatics and epigraphic studies, designing projects for preservation and conservation of Greek antiquities and promoting both rich and unique archaeological finds.

The Branch has been 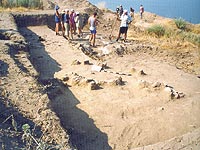 closely collaborating with the Institute of Archaeology of the National Academy of Sciences of Ukraine. Under the financial support from the HFC there were published two volumes of archaeological guides to ancient Greek sites on the northwest coast of the Black Sea and in Crimea. For many years the HFC has been financing two major archaeological excavations in the region, at the ancient Nikonion and by the village of Koshary. Together with universities from Lviv and Odessa, some financial support has been also provided for archaeological field practice of the university students at the excavation of Tyras. The HFC provided support to the Anastasios G. Leventis Foundation, which financed and implemented restoration works in the Archaeological Museum of Odessa conducted under the supervision of Prof. Vassos Karageorghis.

5. Renovation of the ethnographic museum: 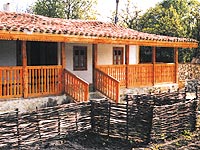 road and the Renaissance International Foundation supported the Greek community of the Crimean village of Chernopolie (formerly Karachol settled by immi
grants from the area of  Korfokoliba in the region of Forty Kings in Eastern Thrace) in their effort of preserving and promoting of Greek mode of life in the region. The financial aid was provided for the construction of the museum of folklore and traditional agriculture, in which the everyday life, customs and traditions of the Greek settlers are represented.  The exhibit is composed of furniture, domestic utensils, textiles, family relics, photographs and archival documents that tell about history, traditions and distribution of the communities. The museum was a pilot project that followed the policy of the Ukrainian government towards preservation and promotion of cultural heritage of ethnic minorities. The Branch also seeks to making its own contribution to the dissemination of Greek traditions, culture and historical evidence in order to lay down a foundation for the support and promotion of Hellenism in the region.

6. Music, songs and dances of the Greeks of Azov:

In 2005 the Branch granted financial support to the valuable effort of Aleksandr Rybalko in promoting the musical heritage of the Greeks of Ukraine by means of recording two audio CDs and a video CD that contained traditional music, songs and dances of the Greeks of Azov region.

7. “OLKAS: From the Aegean to the Black Sea. Medieval Ports in the Maritime Routes of the East“:

The Branch participated in the EU-funded project “OLKAS: From the Aegean to the Black Sea. Medieval Ports in the Maritime Routes of the East” implemented jointly by 7 cultural organizations from 6 countries under the leadership of the European Center for Byzantine and Post-Byzantine Monuments with the purpose of developing new instruments for the promotion of cultural tourism in the areas of the Aegean, the Black Sea and the Caspian Sea. Through its participation in the project, the Branch gained a valuable experience in collaborative research of the international scale.