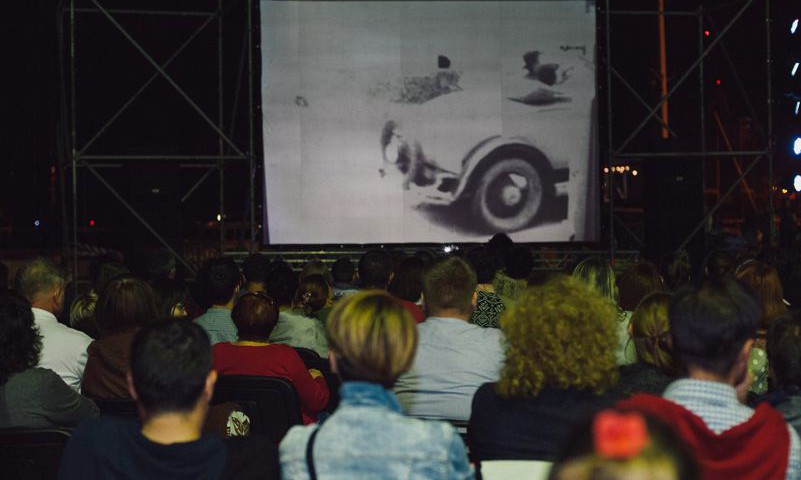 The Branch of the Hellenic Foundation for Culture in Odessa and the Greek Film Archive – Film Museum will participate as partners in the 6th “Silent Nights”International Festival of Silent Films and Contemporary Music to be held on the mooring of the yacht-club of the Passenger Ship Terminal of Odessa on August 22-23, 2015.

A poor student Dinos Vristhenis has dropped out of his studies in the university because of dire financial difficulties and is job hunting. In a theatre company, where he gets employed as an actor, he meets Niki, the leading actress, and they start a love affair. Soon, however, Niki leaves Dinos for a wealthy industrialist. Dinos is disillusioned, abandons the theatre and finally finds himself among the scum of society full of drugs and alcohol. Poverty drives him to get a job as a labourer at a tobacco factory which makes him reconsider his life. Dinos declares a war on social injustice and becomes the leader of a workers’ union. For his activity he goes to prison where he is placed abreast criminals and tramps. When he is released he clearly realizes that his goal is to fight social corruption.

The Social Decay is a film that heralded the era of the Greek neo-realism. From his Marxist position Tatasopoulos, whose father had to sell a plot of land in Constantinople to provide necessary funds for the film, addresses the isuue of social inequality and exploitation, which escalate particularly during the economic crisis.The social criticism embedded into the film focuses not only on protection of workers’ rights but also on social rottenness and degradation to lumpens among populations of large industrial cities. In an interview, director and leading actor Stelios Tatasopoulos explained that “In this film I focused on white slavery and drugs. I described drug trafficking even in hospitals and exposed the corruption and wickedness permeating the penitentiary system “. The Social Decay is included on the top 10 of the best Greek films of all times.

Biographical notice
Stelios Tatasopoulos (1908–2000) took a cinema course in the Dag Film School run by the Gaziadis brothers and studied drama with Rontiris and Veakis. He played in almost every one of the Dag Film productions and went to Paris to further his studies.

Restoration
By the end of the 20th century the Social Decay had been believed to be a “lost film”. In 1989, Aglaia Mitropoulou urged the director to look up and gather whatever material from this forgotten film he could lay his hands on and the Greek Film Archive would try to restore the film. Tatasopoulos searched the REX Theatre and in one of its storage areas he located all the film negatives in the “raw”, i.e. unedited form. Following the restoration of the film, a new working copy was made by Antonis Tempos with the assistance of Tasopoulos himself. So, 95% of the film was successfully restored, and since then it has been shown in the context of various events in Greece and abroad.