Program of the celebration of the National Holyday – the Greek Independence Day on March 25, 2018

To the attention of applicants for the Greek Language Certificate Test

In celebration of the Greek Independence Day, March 25, the Branch of the HFC presents the Concert of the musical ensemble from Greece “Art Various” composed of:

The concert will be given on March 24 (Saturday) at 19:00 at the Odessa Stolyarsky Specialized School of Music named after. prof. (1 Sabaneev Most Str.).

Program of the concert

The musical ensemble “Art Various” was created in 2003 in Thessaloniki. During fifteen years of regular performances, it has played a remarkable repertoire of chamber music (German arias by Handel, traditional songs of Beethoven, lyrical pieces of R. Rabi) presenting rare compositions of both vocal and instrumental music.

It has given multiple concerts in Thessaloniki and other cities of Greece. Using a vast repertoire, the ensemble attempts to interpret the musical pieces in various combinations. The “Art Various” gave remarkable performances at the Assembly Hall of the Aristotle University in Thessaloniki, the Sani Classic Festival in Chalkidiki, the Αthenaeum International Music Center in Athens, the Hall of the PARNASSOS Philological Society, the Aneton Theater in Thessaloniki and the Vafopoulio Cultural Center. In December 2009, within the framework of the Year of Haydn, the ensemble presented an extensive program of rare pieces by the Viennese composer.

Successfully participating in the Sunday Morning concerts organized by the State Orchestra of Thessaloniki, the “Art Various” presented a diverse program from the Baroque to French Impressionism.

Expanding their cooperation, the team of the ensemble created the chamber orchestra “Art Various symfonieta” and the female vocal ensemble “Art Various voices”, with which it performed Christmas and Easter Oratorios.

He studied piano from Afrula Ziudra-Philippide at the Conservatory of Northern Greece, where he received a diploma with honors. He studied with Simon Mihai, Martino Tirimo and the world-famous pianists and maestro Dimitris Tufexis and Nikolaos Astrinidis. He attended international seminars in Horto Pilio with Giorgos Chatzinikos and Ivan Eftimov, the vice-rector of the Music Academy in Sofia, as well as workshops of song accompaniment and chamber music in Mozarteum in Salzburg. He represented Greece at the 3rd Festival of Young Performers of the EU countries in Nyor, France, where he received the award as the best participant.

He was honored at the Competition of Young Performers, organized by the State Orchestra of Thessaloniki, and took part as a soloist in the concerts of the young performers of the Municipality of Thessaloniki. He participated in the 3rd International Musical Month in Porto Carras in Chalkidiki. In 2003, he created the band “Art Various”, with whom he performed at well-known concerts and festivals in Greece. In August 2009, he participated in the Sani Classic Festival in Chalkidiki, and in November of the same year, he performed together with “Art Various” in the Hall of the PARNASOS Philological Society in Athens.

At the age of 6, she began to play violin at the State Conservatory in Thessaloniki with her father and violin teacher, violinist Odysseus Kuzof. In June 1994, at the age of 18, she received a diploma with honors.

She attended violin and chamber music workshops of Tatsis Apostolidis, Mr. Demertzis and Gabor at the Anatolia American College as well as Mr. Christos and Dimitris Polizoidis, Elizabeth Beich and Margarita Marcela in in Graz, Austria. She took part in the “Workshop of Old Music” at the New Conservatory of Thessaloniki and studied with Mr. Gunnar Letsbora.

She studied with Lutz Kune and Wolfgang Holner. She attended master classes of Stelios Kafandaris. She was a member of the State Orchestra in Thessaloniki since its inception, as well as the Municipal Orchestra. She gave concerts of chamber music and received good press reviews. He has been in the State Orchestra since 1994, and since 2001, he has been a regular member of the orchestra. She teaches violin at the Conservatory of Northern Greece, as well as at the Samara Conservatory and in Astrinidio.

Stella Tembreli was born in Thessaloniki in 1992.

She is a graduate of Thessaloniki Music School. She studied cello at College of Music of Thessaloniki in the class of Dimitris Alexandrou, where she received a diploma with honors in 2012. In 2015, she completed her studies at the University of Macedonia at the Faculty of Musical Sciences and Arts, majoring in cello in the class of Dimitris Patras. In 2014, she participated in the European program Erasmus in the ArtEZ Conservatorium in Zwolle (Holland) in the class of Jeroen Reuling and Carlin Bartels. She attended many workshops both in Greece and abroad. In 2011, 2012, 2014 she won the 3rd, 1st and 2nd prizes respectively at the University of Macedonia Chamber Music Competition. She gave solo concerts and took part in concerts of chamber music in Greece and abroad. Since 2011, she has been a member of the “Violoncellissimo” under the leadership of D. Patras, and since 2017, of the “Art Various”. In 2014, she participated in the recording of the CD by D. Maramis and Todoris Vutsikakis “Sensual Age”, the CD of Ch. Gatzoflias “In the Waters of the Saints” in 2016, and the CD by Nikos Vafidis “Too Much White” in 2016. She collaborated with many Greek composers and performers such as Nikos Kipurgos, Dimitris Maramis, Chronis Aidonis, Sofia Avramidou, Todoris Voutsikakis, Andreas Karakotas, Giannis Papageorgiou and others. Since 2015, she has been working as a cello teacher at the musical schools and the Conservatory of the Municipality of Drama.

She studied at the department of vocals at the State Conservatory of Thessaloniki with L. Takahashi and L. Tselepidi, She also studied the theory of music from T. Mimikos. After she had successfully passed her examinations, she studied at the School of Music and Applied Arts of the University of Vienna in the class of Helen Mezrizna Carusso.

She attended Eric Verba’s workshops in opera in Salzburg and Vienna, as well as Lied, Oratorium and Opera with Professor Walter Berry. She collaborated with the St. Pölten Opera in Austria.

She participated in the 3rd International Musical Month in Porto Carras in Chalkidiki. Since 2003, he is a member of the “Art Various”, with whom she performed at festive events and festivals in Greece. She performed at the Sani Classic Festival in Chalkidiki, in the Hall of the PARNASSOS Philological Society in Athens, in the Assembly Hall of the Aristotle University in Thessaloniki as part of the Demetrius Festival of the Municipality of Thessaloniki. Together with the “Art Various – chamber orchestra” she participated as a soloist in Easter and Christmas oratorios. She is a teacher of vocals and opera at the Macedonian Conservatory of Thessaloniki and the Conservatory of Northern Greece. 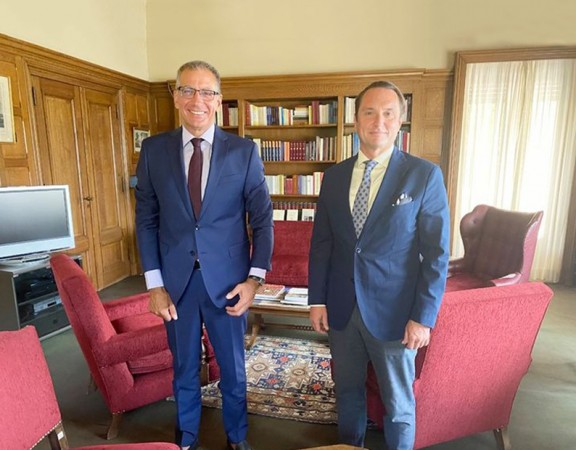