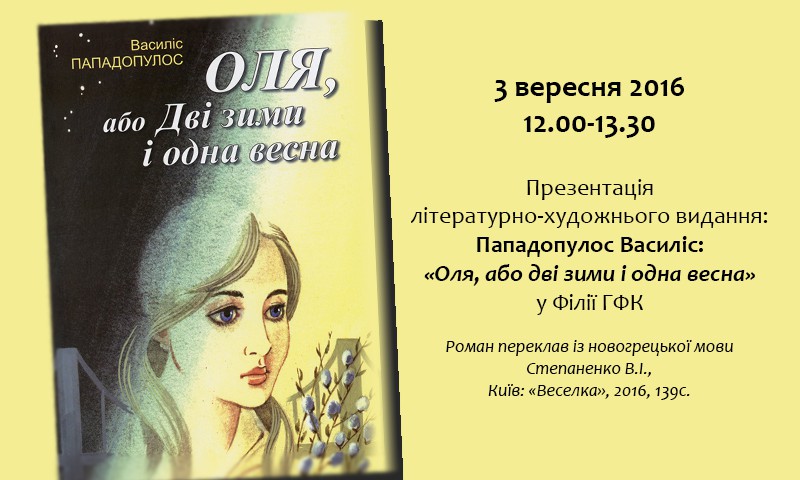 The novel written by the contemporary Greek writer and a diplomat on the basis of his personal accounts of the Post-Soviet Ukraine in 1995. The book first published in Greece in 2003 tells two stories which go in parallel to each other.

The Greek diplomat observes the society that is changing rapidly after the fall of Communism and strives to understand what is happening. The 18-year-old Olya lives in Kyiv is making her effort to survive amidst misery and total impoverishment. She falls into relationship with the ringleader of a criminal gang, gets exposed to unexpectedly wealthy life and luxury and escapes from reality… until the young woman witnesses a crime that abruptly changes her entire life.

In a cycle of unexpected situations and various experiences, the diplomat discovers that he has much in common with people around him. Both Olya and him, they witness the same events, but they perceive them in different ways. In the end, their paths intersect, even though they never meet each other.

The author, Vasilis Papadopoulos, was born in Athens in 1960. He graduated from the Law Department at the University of Athens and completed his post-graduate studies in the field of international and European law in France. He began his diplomatic career in the Greek Ministry of Foreign Affairs in 1985, and since June 2013 he has been serving as the Extraordinary and Plenipotentiary Ambassador of Greece to Ukraine.

“Memory of K.K. Kostandi lives in the hearts of Odessites”