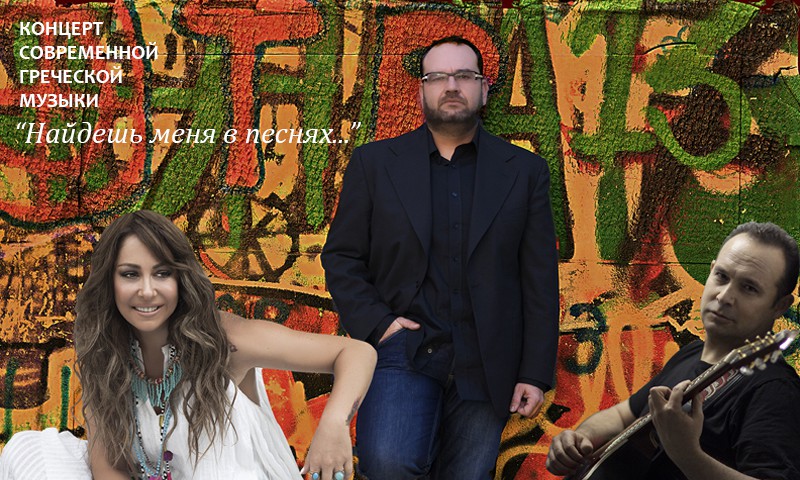 In celebration of the city day, the Branch of the HFC presents Greek singers Kostas Makedonas and Melina Aslanidou accompanied by an orchestra under the direction of Andreas Katsigiannis in a large Gala Concert “You’ll Find Me in My Songs…” We invite you to join in the voyage of songs inspired by Greece and its sweet sun. The beautiful music will fill the audience with unforgettable images and feelings.

Kostas Makedonas was born in Thessaloniki and studied in the High Industrial School. At the same time, he performed songs at small gatherings where he met composer Stamatis Kraunakis. In 1988 he moved to Athens and the next year he released his first personal album “Have No Idea”, in which he performed songs written by Lina Nikolakopoulou and composed by Stamatis Kraunakis. Since then, he has recorded 12 personal albums of Greek music.

Throughout his musical career, he has collaborated with such renowned musicians as Georgios Dalaras, Manolis Mitsias, Alkistis Protopsalti, Giannis Markopoulos, Stamatis Kraunakis, Christos Nikolopoulos and Dimitra Galani. Together with other Greek and foreign musicians, in 20015 he received an award in Vatican for the free performances at charitable events.

In 2013 he played the leading role in the most popular musical and theatrical performance of the last decade titled “What is it my life” about the life of Mikis Theodorakis. Apart from music, he enjoys aviation and pilots the Airbus A320/A321 aircrafts.

With a voice that “sings to the Gods”, Melina Aslanidou, contemporary Greek ethinc-folk-pop singer, is one of the most popular artists Greece has to offer to the world stages. Born in Stuttgart, Germany Melina came to Greece with her family in very young age. Growing up in a small village in Pella (home of Alexander the Great) Melina participated in local choirs from her childhood, becoming familiar with Byzantine, Folk and Ethnic music.

During the student years in Thessaloniki she started singing in student rebetiko hangouts. Her husky voice, close to perfection and her unique stage presence soon drew the attention of producers and record labels. Since the year 2000 Melina stepped from the student small clubs to bigger venues, stadium shows and tours around the world (Europe, USA, Australia) , sharing the stage with great Greek artists such as George Dalaras, Haris Alexiou, Glykeria, Yiannis Parios, Antonis Remos and Eleni Vitali, to name but a phew.

For more than 15 years, Melina Aslanidou scores platinum record sales, collaborating with great composers such as Christos Nikolopoulos, Antonis Vardis, Stefanos Korkolis, Nikos Antipas. By the winter of 2014 to 2015 Melina Aslanidou saw her popularity growing to a larger scale when she became ”coach” in the Greek version of the international talent show «The Voice” for two seasons. Now she is one of “the most wanted female performers touring constantly to bigger and bigger audiences.

” I sing since I started talking, even before I started walking”, sais Melina. ” I was singing in the neighborhood to my grandmothers and nanas … my grandfather, of Pontic roots, told me that my voice has a “ntalka”, a pain, there there, since I was a child … ”

Melina Aslanidou, by far one of the most talented performers, of her generation, brings her strong presence to her live performances, singing from the heart, flirting with the audience with passion, in emotion. With a group of excellent musicians, her set list includes songs from her personal discography, contemporary covers, ethnic folk standards, popular fifties and songs by the golden decade of Greek cinema.

Andreas Katsigiannis was born in Athens in 1976. He comes from a family that has close relation with Greek music. He grows up in a music environment that is related to Rempetiko song, contemporary Greek music and also Byzantine music.

Starting substantially his professional career playing santouri in discography and in concerts, in parallel he studied Byzantine Music next to such leading precentors as Manolis Hatzimarkos and Michalis Meletis and music theory and harmony of music in the Municipal Conservatoire of the City of Volos.

In 1993-1997 he got close to the important violinist Kiriakos Gouvendas, and together they produced various innovations in the New Greek music. In 1998 Andreas Katsigiannis established the orchestra “ESTOUDIANTINA” that united friends and supporters of the musician from the cities of Nea Ionia and Volos. To date, the orchestra has released 14 albums (12 CDs and 2 DVDs).

Although since the year 2000 his career has been focusing on collaboration with Giorgos Dalaras, Andreas Katsigiannis also collaborates with other well-known geek singers including Nana Mouskouri, Maria Farantouri, Manolis Mitsias and Glykeria as well as with the new generation of singers and also singers of traditional music.

Andreas Katsigiannis as a composer has written music for more than fifteen plays, a lot of documentary films and television series.

His music has been published in several recordings worldwide with 11 personal albums and his collaboration in more than 250 songs, composed in collaboration with other musicians. In March 2009 the Patriarch of Alexandria and all Africa Theodoros II granted him with the distinction of “SOVEREIGN MASTER IN CATHEDRA” in recognition of his cultural work and his offer in the Emigrant Hellenism.