The Odyssey of Gennadiy Vereshchagin

Exhibition “100 years from the date of birth of Vassilis Tsitsanis” 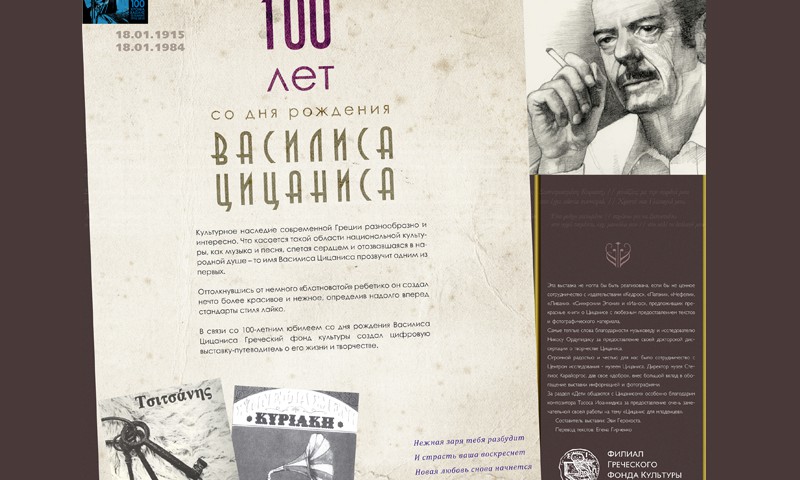 The flatbed photographic exhibition accompanied by the performances of music and songs of one of the founders of contemporary popular Greek music, the renowned singer and composer, poet and bouzouki player Vassilis Tsitsanis, will open October 15, 2015 at 16:00 at the Branch of the HFC.

Vassilis Tsitsanis was born to the family of shoemaker Konstantinos Tsitsanis and Viktoria Lazou (both from Epirus) in the town of Trikala on January 18, 1915. He was the eighth child of 14 children in the family. Only four children survived, and Vassilis was named after the diseased firstborn. His father had a mandolin, which he used to play almost exclusively Klephtic songs from his fatherland. For little Vassilis these songs, together with Byzantine singing performed in churches, were the first songs to hear.

At 11years of age Vassilis played a mandolin, which a local craftsman would later make over into a bouzouki. While studying in a gymnasium, he took lessons of violin playing, but it was bouzouki that increasingly drew his interest. Originally, bouzouki was identified a musical instrument associated with lawlessness and prison, while violin as an instrument of the European orchestra, on the contrary, symbolized the “good society”.

When the time came to make his choice, Tsitsanis put the violin aside and took bouzouki in his hands. The choice of bouzouki was the acknowledgement of identity and class integration as well as solidarity with the poor family of his childhood. By taking his father’s magic instrument in his hands he broke the taboo for bouzouki and put himself at risk of being disdained, derided and falling victim of social degradation. However, due to his own skills, some help from amicable people and a good luck he managed to not only overcome the bad consequences and ennoble the despised instrument, but also take a leading position in musical culture of his homeland.

At the age of 15 Tsitsanis composed his first songs. In the late 1936 he left Trikala for Athens with the intention of entering the university and studying law. “But, apparently, as the sparks fly upward I was destined to profess in laïkó, which has always fascinated me. Since my arrival in Athens I had taken up the struggle for survival. Those were hard but amazing years. I started working in various establishments in order to cover my expenses; I rented a room and my expenditures rolled in and weighed upon me”. In order to replenish his income, he worked in taverns. While the first recordings of his songs had been made in 1937, the majority of the pre-war records were released in the years to follow. Tsitsanis created a new kind of popular songs intended for public at large as opposed to the Rebetiko songs, which drew interest of a restricted audience.

The years of the German occupation he spent in Thessaloniki, where he worked in various establishments. In 1946 he returned to Athens and resume recording. The period from 1945 to 1955 marked, probably, the peak of his career, when he found broad acceptance in discography, and it was during these years that he worked the most.

When in the middle of the 1950s the content of popular folk music changed and some Arabic and Indian influences dominated Tsitsanis made an attempt to adapt his music to the new circumstances but without rejecting his own style. Being never fond of any seasonal “fashions”, in his late years he always included in his classical repertoire the performance of a few songs influenced by the prevailing melodies.

In 1980, in the initiative of UNESCO, there was recorded an album called “Harama”, named after the establishment where Tsitsanis had been performing for the last 14 years of his career and life. In the record there bouzouki plays by Tsitsanis of his classical songs as well as many impromptu passages. The album released in France in 1985 takes the award of the Music Academy Charles Gross. In the meantime, the leading creator has left for ever. In 1984, on the date of his birthday (18th of January), he dies in Brompton hospital in London after complications of a surgery of the lungs. Before that, for 24 days he appeared regularly in a place and worked out new songs…

In his creative career Vassilis Tsitsanis was a continuer and reformer of the Rebetiko, which synthesized various traditions of Greek folklore, oriental music in its Greek (Smyrnean) version, Greek Orthodox singing and Western popular music.
It can be said that Tsitsanis helped the Rebetiko out of the marginal underground environment and turned it into the nationwide popular music, the so-called “laïkó”, on the basis of which there later developed the now worldwide known “artistic” neo- laïkó.
At the opening of the exhibition the songs of Vassilis Tsitsanis will be performed by a soloist from the regional Philharmonic Society and a laureate of international contests Aglaia Polychronidi and the Folk Orchestra from Odessa National Music Academy (directed by the Honored Artist of Ukraine Oleksandr Oliynyk).

The event is sponsored by Hephaestus Construction Company.